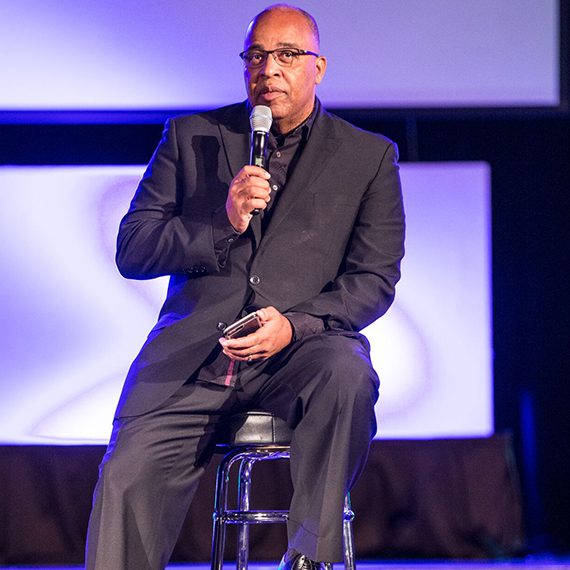 Bishop McLaughlin?s duties are far reaching. He lists his greatest of all accomplishments as being happily married to Narlene Jackson, his college sweetheart for 40 years. Lady Narlene as she is affectionately called, assists him in all aspects of the ministry as the church and mall?s Chief Administrative Officer. They also minister together at conferences and workshops and serve as a model couple to pastors and ministry leaders around the world. They have two adult children, Angel Narlene who serves as Director of Innovations and Strategies for the Ministry and Stephen Vaughn McLaughlin who serves as the head basketball coach for the Academies High School.
Email:
bishopvaughn@tphim.org

At age 26, Bishop McLaughlin made a personal profession of faith and submitted to the Lordship of Jesus Christ. In just a few months after his conversion he began preaching the gospel of Jesus Christ anywhere and everywhere there was someone who would listen. He worked with several outreach ministries to youth and the homeless and was eventually staffed at the Mt. Calvary Baptist Church where he served the local body in any and every capacity imaginable. In 1987, at 30 years of age, Bishop McLaughlin accepted the pastorate of his first church in Green Cove Springs, Florida. He served as interim pastor for eleven months. Bishop McLaughlin answered the call of God to pioneer a local church that would exemplify the biblical pattern of a non-traditional and Kingdom focused ministry.

In 1988, he founded The Potter?s House Christian Fellowship. Today, The Potter?s House is home to over 5,000 members after starting with approximately 40 members in the first Sunday?s worship service. Over the years, Bishop McLaughlin and The Potter?s House ministry have been acknowledged and awarded by local, state and federal agencies for its outstanding and consistent work in the area of jails and prisons, nursing homes, hospital ministry, food and clothing efforts and community transformation.

After years of mentoring other pastors and demonstrating a father?s heart, he was consecrated into the office of bishop on March 6, 1999. In preparation for the office of bishop, he submitted to the tutelage of the Joint College of Bishops and successfully completed the courses of study required by the Joint College at Case Western Reserve University in Cleveland, Ohio. Bishop McLaughlin, through Covenant Fellowship International, now provides covering for over 100 ministries and pastors around the globe. Churches have been birthed and reformed and helped by the ministry of the bishop from the Caribbean to Africa and all of India.

Bishop McLaughlin is the founder and Chancellor of The Potter?s House Christian Academy. The Academy is a fully accredited institution of academia and currently has enrolled over 600 students from grades K-4 to 12th grade. The academy began in 1996 and had its first graduating senior class in 2005. During the accreditation process, The Potter?s House Christian Academy set a standard by becoming the first private school in the state of Florida to attain unanimous approval for accreditation without any recommendations for improvement on its first application. The academy is now accredited by 3 national agencies, SAC, Middle States and FAACS. ?This honor speaks to the excellence in which Bishop McLaughlin and the school operates. Graduates of the Academy have matriculated through major universities all over the United States. Schools the likes of University of North Carolina, University of Notre Dame, University of Florida, Florida State University, Rutgers, Air Force Academy, University of South Florida, St. Francis University, Florida A&M, just to name a few.

In 2002, after successfully mastering the concept of church and the marketplace, Bishop McLaughlin led The Potter?s House in the purchase of the first fully enclosed shopping mall in Jacksonville?s history. It was a 403,000 square foot facility formerly known as the Normandy Mall. It had been sitting vacant for over 16 years. 48 acres of property purchased for 4 million dollars and now valued at over 40 million dollars. Approximately 130,000 square feet of the mall, a former Sam?s Wholesale building is now home to the main auditorium and church facilities which include a nearly 4,000 seat sanctuary, a 800 seat children?s church, a 150 seat wedding chapel, a 13,000 square foot nursery with a indoor playground, a teen restaurant called the Rock Caf?. There is also, Java Rock Coffee Shop, a state of the art recording studio, beautiful administrative offices, a lecture hall, conference rooms and much more. The purchase and renovation of this mall, formerly the Normandy Mall, now called Kingdom Plaza at Normandy Mall, has brought national attention and recognition from news media of every form and has taken Bishop McLaughlin around the world via several international appearances on The Trinity Broadcasting Network (TBN), Black Entertainment Television (BET) and DayStar television just to name a few.

The nation?s leading Christian Magazines have all featured his accomplishments and the ministry as cover stories. He?s graced the covers of Charisma Magazine, Ministries Today, Leadership Journal, Church Executive Magazine, Leadership Network, Christianity Today, several other smaller publications, many local newspapers and has even been featured in the Wall Street Journal and other finance publications.

In January of 2007, another 177,000 square foot of the mall was opened to the community to foster economic empowerment. ?It is now home to the church owned and operated Potter?s House Soul Food Bistro, King Pins Bowling Center and Temple Builders Fitness Center. The Bistro which seats close to 300 has become one of the most popular eateries in all of Florida. The Bistro has received outstanding reviews from local and national food critics and has been featured in all local periodicals as the best soul food in town. In October of 2012, the renowned Bistro ranked number three on Urbanspoon?s list of ?America?s 100 Most Popular Cheap Eats?. Restaurants from sixty-one metropolitan areas across 27 states were represented in the list. In 2015 it also tied for first at the ?Hoodie Awards? for best Soul-Food in the nation.

Temple Builders is a 15,000 square foot fitness center equipped with swimming pool, sauna, steam room, Jacuzzi and state of the art equipment. Following the opening of these two businesses was the official Grand Opening of the mall. The remainder of the stores opened which included King Pins Bowling Center, which offers a 22-lane state of the art Cosmic Bowling alley with a huge game room and a pro bowl shop. Other shops within the mall include a jewelry store, medical service supply, urban clothing, bridal shop and tuxedo rental, a full daycare center, florist, Eden Spas and Salon, a health food store, cellular services, furniture store, Job Corp headquarters, a video production studio, barber shop, insurance company and much, much more. The Mall has been tabbed as the epicenter of the Normandy Village area of Jacksonville and the community is designated for upgrades and improvements that will make this section of Jacksonville a much more desirable area to visit.

Bishop McLaughlin?s anointed and skillful exegetical handling of the Scriptures, along with his personal and ?down to earth? approach to the Gospel has drawn followers locally, throughout the U.S. and abroad. Thousands of people have come to Christ through his ministry. Bishop McLaughlin travels the world sharing the good news of Jesus Christ. Over 7000 recorded video messages are available through The Potter?s House audio/video ministry of Bishop McLaughlin?s powerful preaching.

Bishop McLaughlin?s duties are far reaching. He lists his greatest of all accomplishments as being happily married to Narlene Jackson, his college sweetheart for 40 years. Lady Narlene as she is affectionately called, assists him in all aspects of the ministry as the church and mall?s Chief Administrative Officer. They also minister together at conferences and workshops and serve as a model couple to pastors and ministry leaders around the world. They have two adult children, Angel Narlene who serves as Director of Innovations and Strategies for the Ministry and Stephen Vaughn McLaughlin who serves as the head basketball coach for the Academies High School.

Bishop McLaughlin serves and has served on various boards and committees: